Charter a Bus to the Freedom Trail in Boston

If you’re planning a group trip to the grand New England city of Boston, don’t leave without a walk along the Freedom Trail. A charter bus rented with National Charter Bus Boston can take your group straight Downtown to the Boston Common where this historical adventure begins. Our reservation specialists—available 24/7 at (617) 275-8102—will use your ideal Boston itinerary and number of passengers to set you up with the type of charter bus you need for your trip. Complete your Freedom Trail experience with private transportation operating on your time. 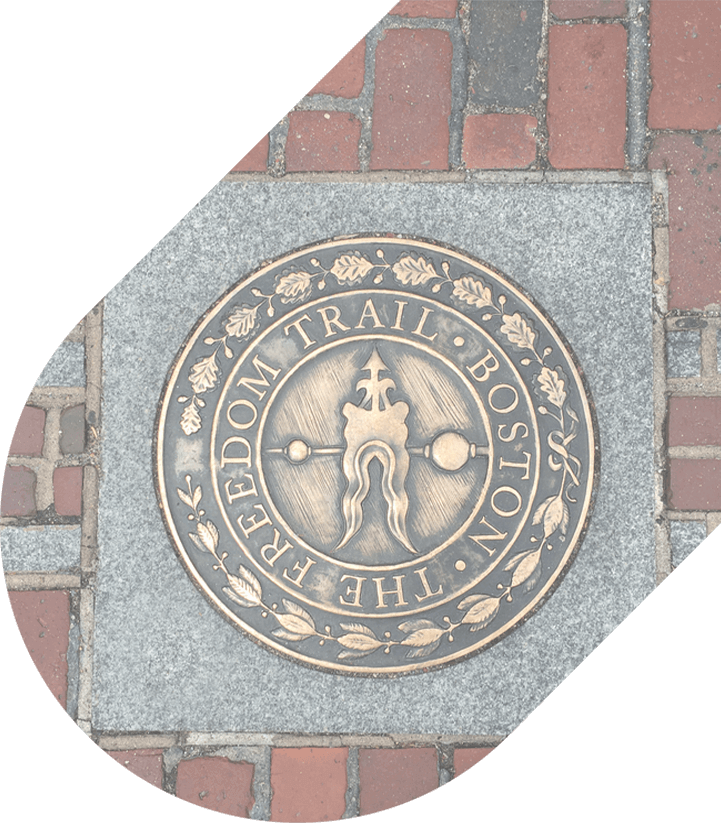 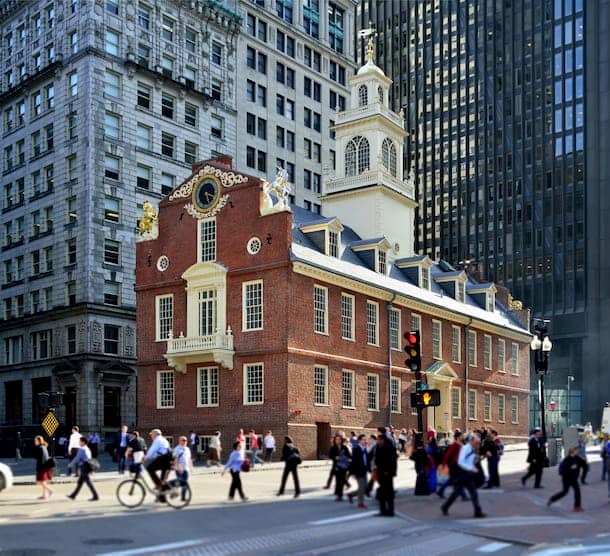 Explore the Freedom Trail with a Charter Bus in Tow

Picture this: you’ve just finished walking the entire Boston Freedom Trail and climbed all 294 steps to the top of Bunker Hill Monument. (You do what you’ve got to do for that sweet shot of the city skyline.) At this point, it’s no surprise your feet are aching and you’ve sweat a little through your t-shirt. It’s a beautiful, sunny afternoon in the seaside city of Boston, after all, and you’re enjoying soaking in the sights and the history!

Then you see it, the private motorcoach you rented with National Charter Bus in all of its plush-seated, air-conditioned glory. Thank goodness, because the closest “T” stop is a 15-minute walk and you don’t have the patience to wait for a rideshare. Since you already worked out your itinerary when you called us to reserve a bus, your personal driver knew exactly what time to pick up you and your group. When you rent a private charter bus or minibus to book-end your 2.5-mile Freedom Trail trek, your group (and your feet) will thank you.

The Rundown on the Boston Freedom Trail

There are 16 official sites on the Boston Freedom Trail, each one a landmark of historical significance in Boston and the United States. You can start at either end: the Boston Common or Bunker Hill Monument. We suggest getting dropped off at the Common and making your way through Downtown and the North End to the slightly less-trafficked Charlestown. Follow the red-brick trail from beginning to end, and if you’re on a self-guided tour, make time to linger at the many attractions, shops, and restaurants along the way.

Your first stop is America’s oldest public park. Once a pasture for local livestock 200 years ago, today it bustles with sunbathing locals and Nikon-clad tourists snapping shots of Parkman Bandstand and the Frog Pond. 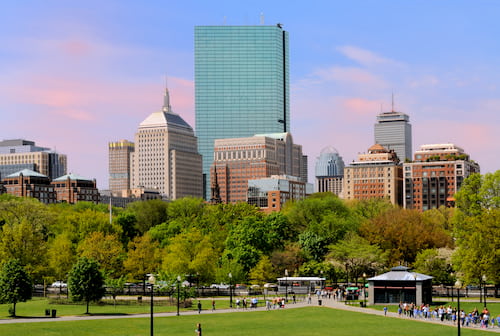 Marked by its unmistakable golden dome, the State House has been home to Massachusetts government since 1798. Self-guided free tours of the State House are available year-round from 10:00 am to 3:30 pm.

When Park Street Church was founded in 1809, the 217-foot steeple was the first landmark travelers saw when they came to Boston. Today it’s home to a very active, influential congregation and is one of the most timeless and historic places to host a wedding in Boston (and we can hook you up with a shuttle bus rental just for the occasion).

This burial ground is the final resting place for some of the most notable citizens in American history. You’ll see the tomb of John Hancock and headstones for Paul Revere and Samuel Adams.

Built in 1754, King’s Chapel was the first Anglican church in a very Puritan Boston. It’s congregation helped pave the way for religious freedom in the United States and included attendees like George Washington and Paul Revere.

The oldest public school in America is the Boston Latin School, founded in 1635. Five signers of the Declaration of Independence studied there, including Benjamin Franklin, whose statue currently marks the location of the original schoolhouse. The school still operates today in the Fenway-Kenmore neighborhood of Boston.

This historic building was the original site of Ticknor and Fields, the 19th-century publishing giant. They produced literary works by great American writers like Henry David Thoreau, Mark Twain and Charles Dickens.

This is where the infamous Boston Tea Party began! Over 5,000 men crowded into the meeting house on December 16, 1773 to debate the controversial tea tax, and when no compromise was reached, they marched to the harbor and dumped 342 chests of tea into the sea.

One of the more iconic sites on the Boston Freedom Trail, the Old State House stands as the oldest surviving public building in Boston. Today it’s a museum filled with exhibits and historical artifacts like John Hancock’s red velvet coat and tea salvaged from the Boston Tea Party.

In 1770, just steps away from the Old State House, five civilian Bostonians were killed by British Redcoats in a tense riot that became known as “the Boston Massacre.” The event is commemorated by a site marker at the intersection of State and Congress Streets in Downtown Boston. 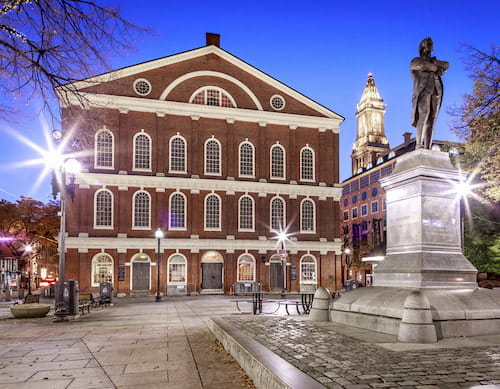 The historic home of Paul Revere is now the oldest remaining building in Downtown Boston. If you’re with a group and want to tour the house, make sure to call ahead and make a reservation.

This church in the heart of Boston’s North End is the most visited historical site in the city. In 1775, two glowing lanterns were hung in the steeple as the signal that the British were coming by sea. This signal sparked Paul Revere’s legendary midnight ride.

This burying ground is the final resting place for many prominent personalities in American history. The builder of the USS Constitution is buried here, as well as two Puritan ministers who were associated with the Salem witch trials.

Nicknamed “Old Ironsides” during the War of 1812, the USS Constitution is the oldest commissioned warship afloat. She’s stationed in Boston Harbor, where visitors can take self-guided tours for free.

The final stop on the Freedom Trail is the grounds of the Battle of Bunker Hill, the first major battle of the Revolutionary War. Hike to the top of the 221-foot tall obelisk known as Bunker Hill Monument for panoramic views of the Boston Harbor and city skyline.

Private Tours for Large Groups on the Freedom Trail

If you’re traveling with a large group for a city tour, church outing, or field trip, here are some tours to consider while you traverse the Freedom Trail: 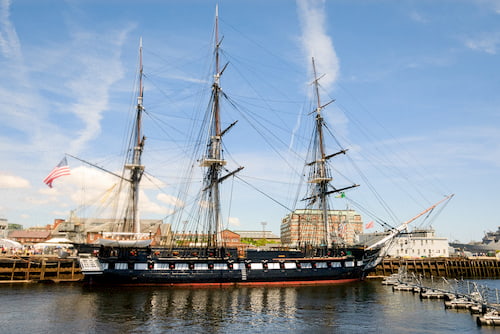 Organize a private group walking tour with the Freedom Trail Foundation for your school field trip, corporate team building, or special event. You can arrange a custom tour to fit your schedule, or choose from one of their unique pre-planned experiences like the evening Lantern Tour or Historic Pub Crawl.

Enjoy one of the large group tours of Old North Church while you’re passing through. Go “behind the scenes” up to the bell ringing chamber in the steeple and down to the tombs in the crypt beneath the church. Keep in mind: they’ll only accept 25 people at a time (or up to 50 with the group split between the bell chamber and the crypt.)

Tour groups and school groups can arrange one of a variety of educational programs at the USS Constitution Museum. Students will enjoy the Ship Design Challenge program where they’ll learn what it takes to build the fastest and strongest ship on the seas, while adults will enjoy Construction “Old Ironside,” an in-depth examination at the structural integrity of the USS Constitution.

Where to Eat Along the Boston Freedom Trail

You’re bound to build up an appetite with all that walking, and Boston has no shortage of delicious and comfortable places to grab a bite. Here are a few places along the Freedom Trail that are also great for large groups.

There’s something for everyone at the stands lining the food colonnade in famous Quincy Market. Indulge in everything from a classic cup of clam chowder at Boston Chowda Co to a slice of pie from Boston’s own Regina Pizzeria, and grab seats in the communal dining space to chow down.

Stop here after visiting Park Street Church (the third stop on the trail) if you’re hungry and want to burn off lunch calories during the rest of your trek. This casual sports bar is the place to go for New England comfort food, a cold beer and billiards. The pub’s upstairs pool loft is a fun location for a large 21+ group gathering Downtown.

Do not leave the North End without a cannoli from Mike’s Pastry. A local tradition from 1946, these massive cream-filled pastries inspire hungry visitors to wait in lines that wind around the block. File in, grab a treat, and eat it on the way to your next Freedom Trail stop. 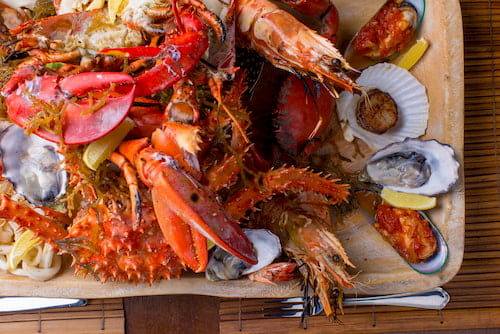 Choosing just one of the restaurants in Boston’s North End is nearly impossible, so we did it for you. The Freedom Trail will take you straight down Hanover Street to Ristorante Fiore, the place to go for classic, homestyle Italian cooking. With three floors of dining rooms, bars, a patio and a rooftop deck, they can serve groups as large as 70.

As you get to the USS Constitution toward the end of the Freedom Trail, it’s a good time to enjoy fine waterfront dining at Pier 6. Dig into New England-style seafood dishes while gazing out at the bustling harbor and city skyline. With views this good, you can bet Pier 6 can accommodate parties from 2 to 200.

Plan Your Trip to the Boston Freedom Trail Today

If you’re ready to lock down the itinerary for your Boston visit, National Charter Bus will create the ideal transportation plan for your group. We offer a fleet of buses to fit a variety of occasions, from field trips to corporate events, and will work with you to make your city trip seamless. Call our reservation specialists today at 617-275-8102 to learn about the services we offer and for personalized assistance in your visit to the Boston Freedom Trail.